Rent is Due – Breakdancing 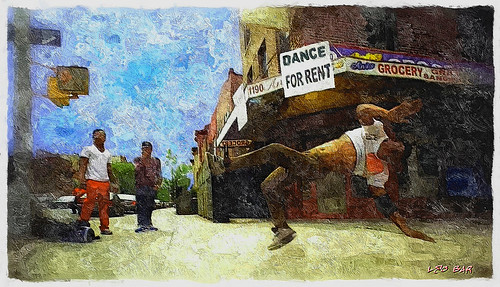 A real treat, boy dancing on the street!

Come to Spanish Harlem and take a cultural bath!

This is a brief slice of the two of NYC’s neighborhoods, their people and cultures.

Enjoy the show,
Leo
~ History and Background ~
Harlem is known internationally as the Black Mecca of the world, but Harlem has been home to many races and ethnic groups including the Dutch, Irish, German, Italian, and Jewish. Harlem was originally settled by the Dutch in 1658, but was largely farmland and undeveloped territory for approximately 200 years. As New York’s population grew, residential and commercial expansion moved northward, and development of the Harlem territory was expanded.

Hundreds of tenement apartment buildings were built in 1904 anticipating the masses from lower Manhattan to occupy them. Unfortunately for the developers, the IRT subway not only made Harlem available to those from downtown, but also made Washington Heights, the Bronx and other northern points accessible. Developers over speculated and many houses went unsold. Real estate agent and entrepreneur Phillip A. Payton approached several Harlem landlords with the proposition that he would fill their empty or partially occupied properties with Black tenants. The idea was accepted and Payton began moving Black families into buildings of Central Harlem in the 1930’s .

Blacks continued to pour into Harlem from points in lower Manhattan, the American South and the Caribbean. Blacks migrated in record numbers from the south to northern cities in search of opportunities and increased wages.

Considered a stronghold of Latino pride, Spanish Harlem evolved from an immigrant enclave to a multi-cultural treasure trove of sights, sounds, tastes and cultural expressions. The heartbeat of the “Nuyorican” soul, Spanish Harlem is the birthplace of many of Latin music’s most favored artists, such as Tito Puente, Eddie & Charlie Palmieri, Ray Barretto and the home of others from international composer Rafael Hernandez to the great Machito. The popular feminist poet Julia De Burgos lived here while “youngblood” graffiti artist of chalk on the street verses, James de la Vega has a storefront from where he sells his visual wares.

Come to Spanish Harlem and take a cultural bath.