I decided to produce this video when 6 months ago I was reading about Marco Polo and how pasta was introduced into Italy. Some little tidbits just hit you across the forehead without you noticing. As I got more interested in the relationship between early Chinese trade with Central Asia and Europe, it became evident that this trade route called the Silk Road was somehow analogous in connecting cultures and people to what the internet is nowadays. I had a tough time keeping this story to a reasonable digestible time. There was so much to tell and recount and the beauty of the scenery and its people was amazing.All in all it was a deep learning experience. I hope you enjoy watching it as much as I did making it.  You can watch it at:  http://vimeo.com/7007938
=== 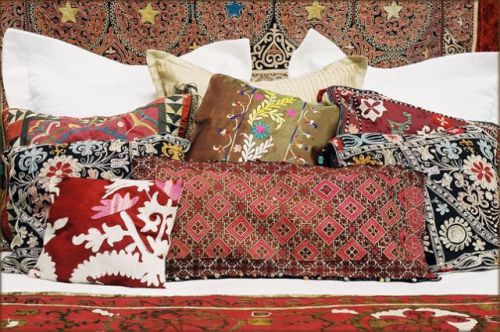 Silk Road is a special term which refers to the trade route between the Central Asia and China. Originally, the Chinese traded silk internally within the empire. Caravans from the empire’s interior would carry silk to the western edges of the region. They were often attacked by the small Central Asian tribes who wanted to capture the traders’ valuable commodities.

In order to protect these caravans and assure the safety of the trade, the Han Government dispatched General Zhangqian as an envoy to build good relationships with these small nomadic states.Starting from Chang’an, today’s Xi’an, which was the capital of the Western Han Dynasty, Zhang led his team across the vast Western Regions and reached Loulan, Guizi and Yutian states and established trade relations with these small kingdoms. Loulan, Guizi and Yutian were three important states in the Western Region at that time. They were all abandoned for uncertain reasons and travelers today can see ruins of these three once flourishing places. Zhang’s officers went even further into the central Asia. All of the kingdoms that Zhang and his team had visited sent their envoys to visit Chang’an (Xi’an) to express their appreciation for the new relationship and show their respect to the Han Government. From then on, merchants could travel on the silk route safely, and they began to explore this new route in order to carry silk from China to other parts of the world.

The famous Chinese Monk Xuanzang in Tang Dynasty traveled the Silk Road during the Tang Dynasty. Xuanzhang began his trip from Chang’an (today’s Xian) and passed through the Hexi Corridor (the area west of the Yellow River), Hami(Xinjiang Province) and Turpan(Xinjiang) and continued his journey westward to India. Xuanzang was surprised by the warm reception he received along his way. It was commonly believed that people in those states were brutal, wild and uncontrollable. Xuangzang’s trip changed his altitude toward the nomadic tribes in the Western Region and this contributed greatly to the Tang government’s friendly relationship with these states. By 760 AD, the Tang Government had lost control of the Western Region and trade on the Silk Road was halted.
It revived tremendously under the Yuan Dynasty during the eleventh and twelfth centuries when China became largely dependent on its silk trade. Genghis Khan conquered all the small states, unified China and built a large empire under his rule. Trade along the Silk Road reached its zenith during this period.

Marco Polo traveled along the Silk Road visiting the capital city Dadu,( today’s Beijing) and wrote his famous book about the orient. In his book, he mentioned a special board held by merchants.This board was the special passport issued by the Yuan government to the merchants to protect their trade and free movement within the country. Preferential treatment was given to merchants and trade boomed. The Chinese traded silk for medicines, perfumes, and slaves in addition to precious stones.

As overland trade became increasingly dangerous, and travel by sea became more popular, trade along the Silk Road declined. While the Chinese did maintain a silk-fur trade with the Russians north of the original Silk Route, by the end of the fourteenth century, trade and travel along the road had decreased significantly.
===
Until the next one…